Bee pollen is considered superfood for fertility. Bee pollen has been linked to improvements in the immune system, to fertility, and to overall nutrition. One animal study found that the consumption of bee pollen is associated with improved sperm quality and male fertility. 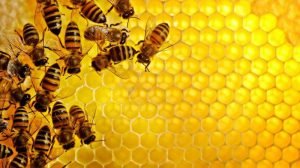 Bee therapy – Bee pollen is a dietary supplement that contains essential amino acids, vitamins A, D, E, K, C, B3, B5, and bioflavonoids. It is thought to improve fertility. Some women may have difficulty conceiving due to a lack of nutrients. Because bee pollen is food that is rich in nutritious substances, taking it as a supplement can help restore the nutritional balance in the body and can improve the chances of conceiving.

It is believed that bee pollen increases estrogen levels and stimulates ovarian functioning; therefore, it can help to release healthy eggs. An animal study showed that the androgenic (male hormone) property of bee pollen caused an increase in the testosterone level and the sperm count. Hence, it may also support male fertility.

A study conducted among women suffering from endometriosis found that taking bee propolis twice a day for 9 months resulted in a 40% greater likelihood of getting pregnant.

Animal studies have found that it can improve the reproductive health of rats.

Royal jelly has been found to have a balancing effect on the hormonal system of women and men and, in recent years, its effect on animal and human fertility has been studied.

Studies have shown that this food has the ability to mimic estrogen, which builds up the endometrium.

Several studies have been performed on infertile men in which the effect of royal jelly on several doses of sperm counts and on various hormone levels was investigated. These studies also showed a pronounced increase in testosterone levels among those who consumed royal jelly, compared to the control group. In addition, it was observed that they had a significant increase in sperm motility as well as protection of their sperm from oxidative damage.

In the hive, royal jelly is the queen bee’s only source of nutrition. The queen is fed this food throughout her life. Larvae that will develop into worker bees later will get small doses of royal jelly only in the first three days of their lives and will then eat other food. Because of the royal jerry, the queen is much larger than the worker bees and she has a much longer life expectancy than theirs. Royal jelly also gives the queen her fertility and, unlike the workers who are barren, the queen is very fertile and lays about 2000 eggs a day.

It’s recommended to consume royal jelly mixed with honey making it very close to its raw form and preserving its qualities.

Apitherapy treatment, the use of bee stings as treatment, has been gaining momentum in recent years. Apitherapy (apis = bee) uses products from the beehive for healing and health purposes. Products from the hive include honey, propolis, pollen (flower powder), wax, royal jelly, and bee venom.

In effect, the treatment involves being purposely stung by bees several times a week. Why? Because treatment using bee stings can help fertility. Apparently, bee venom can balance out all possible autoimmune problems that may be preventing conception and/or implantation, as well as it can help balance the nervous system.

Research has shown that bee sting treatment, as well as acupuncture, were effective in reducing follicle-stimulating hormone (FSH) levels for restoring normal menstrual patterns and fertility.

Bee venom stimulates the immune system through the adrenal gland and the pituitary gland that secrete hormones that stimulate the body to function naturally. It can be said that the healing action of bee venom is not expressed in the direct healing of health symptoms, but indirectly through the stimulation of other bodily systems that treat the symptoms. This is a classic example of holistic therapy. The components of the venom stimulate the systems in the body to secrete hormones that cause the body to treat the problem naturally while strengthening the immune system. Melittin is a four times stronger anti-inflammatory substance than cortisone and suppresses the formation of free radicals and is currently also being studied in connection with cancer treatment. Peptide 401 is probably the main component that can help cure multiple sclerosis.

Bee venom stimulates the systems in the body and causes them to function as optimally as possible.